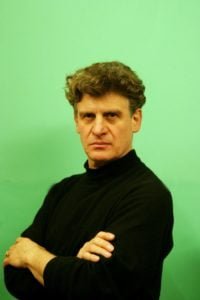 Born in Rome on 1948, his father was  Alfonso dei Carnebianca di Sezze, his mother Clelia Pelliccione. He is considered by art critics the most coherent and brilliant follower of fantastic surrealism which had in its highest expression in Alberto Savino in Italy and in Salvator Dalì at European level. From 1969 he took part to more than 100 international – personal and collective – exhibitions. He won prestigious prizes and awards, his artworks arepresent in many prestigious public and private collections both in Europe and in the rest of the world. Four of his first works, as young artist, are located in the Central Hall of the Historic Artistic Museum, “The Treasure of Saint Peter in Vatican” inside Saint Peter’s Basilica in Vatican City – Rome.

Self-taught artist, since 1966 he worked as painter, also in the field of Italian Theatre Design, with the master Camillo Parravicini  and from 1968 in Dino De Laurentiis  cinema Studios as well as in Cinecittà on the sets of Fred Tuch, where he improved his techniques, accompanying his famous uncle Vincenzo Pelliccione,  stage name Eugene DeVerdi (historic stunt double of Charlie Chaplin who worked for a long time in Cinecittà  and Dino De Laurentiis ‘s Studios as lighting, audio and special effects engineer and inventor).

In  the ’80 he worked in Caracas for Italcambio simultaneously with  Salvador Dali and Pietro Annigoni.

Enzo Carnebianca is a cultured artist, a great expert of the visionary and esoteric Western culture, He has an exceptional technical and perspective preparation. He is the author of unforgettable works entered in the collective imagination.

His style is identified in a fascinating surrealism, which presents in painting chromatic contrasts of turquoise and ocher colors.